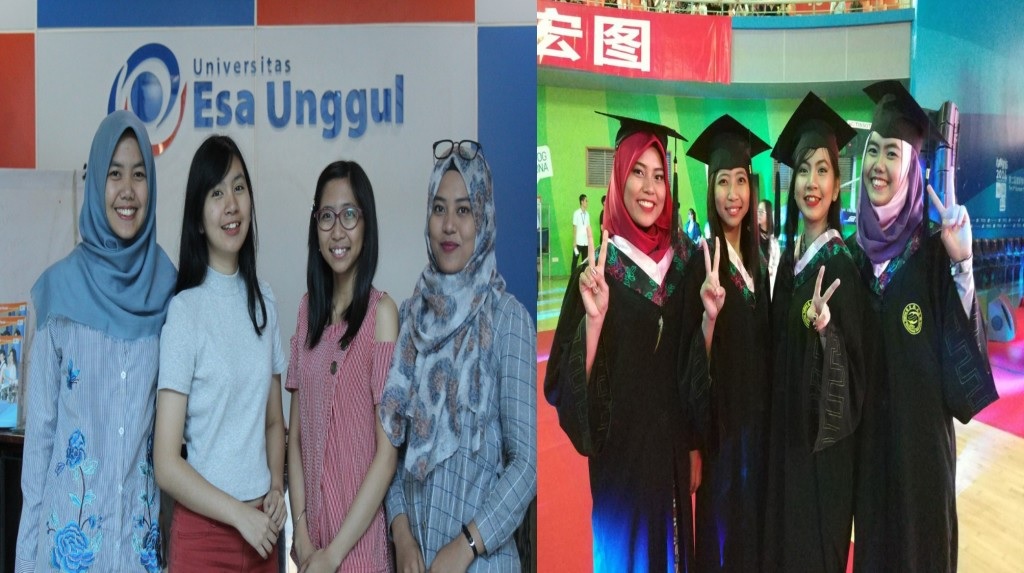 Esaunggul.ac.id, West Jakarta, Esa Unggul University in collaboration with Nanjing XiaoZhuang University created a Joint Degree program which is a program that produces students who get two diplomas and two degrees. The program itself has produced a number of graduates who pursue various fields such as Economics, Politics, Social, and engineering.

Recently four Esa Unggul female students have completed a joint degree program which lasted for 2 years. The four outstanding students were Lulu Luciana, Fitriani Darwis, Irene Angeline and Finni Irene. The four friends from different provinces in Indonesia claimed that it was very unexpected for them to study abroad and study at one of the best Chinese universities, Nanjing XiaoZhuang University.

“Even after graduating from Nanjing XiaoZhuang University we still can’t believe to be able to finish college abroad. Even the idea of studying abroad itself is beyond our expectations, “said the four Friends at the Esa Unggul International Program Room, West Jakarta, Friday (21/07/2017).

According to them, their success in completing education is inseparable from the support of the family and the support of those closest to them. In addition, their perseverance in achieving their goals made their determination to get scholarships and joint degree titles stronger.

“The most important thing is consistency in reaching for everything we want, no hesitation. We won this scholarship not because it was given but we got it through various rigorous selections”, they said.

The four of them got a Joint Degree program scholarship which was facilitated by Esa Unggul in collaboration with the Ministry of Research, Technology and Higher Education and Nanjing XiaoZhuang University. The program itself began with Esa Unggul giving the 100% Scholarship Award to high achieving students, then students who are considered to have the potential were proposed by Esa Unggul to the Ministry of Higher Education and Nanjing XiaoZhuang University to get the opportunity to participate in the Joint degree program. 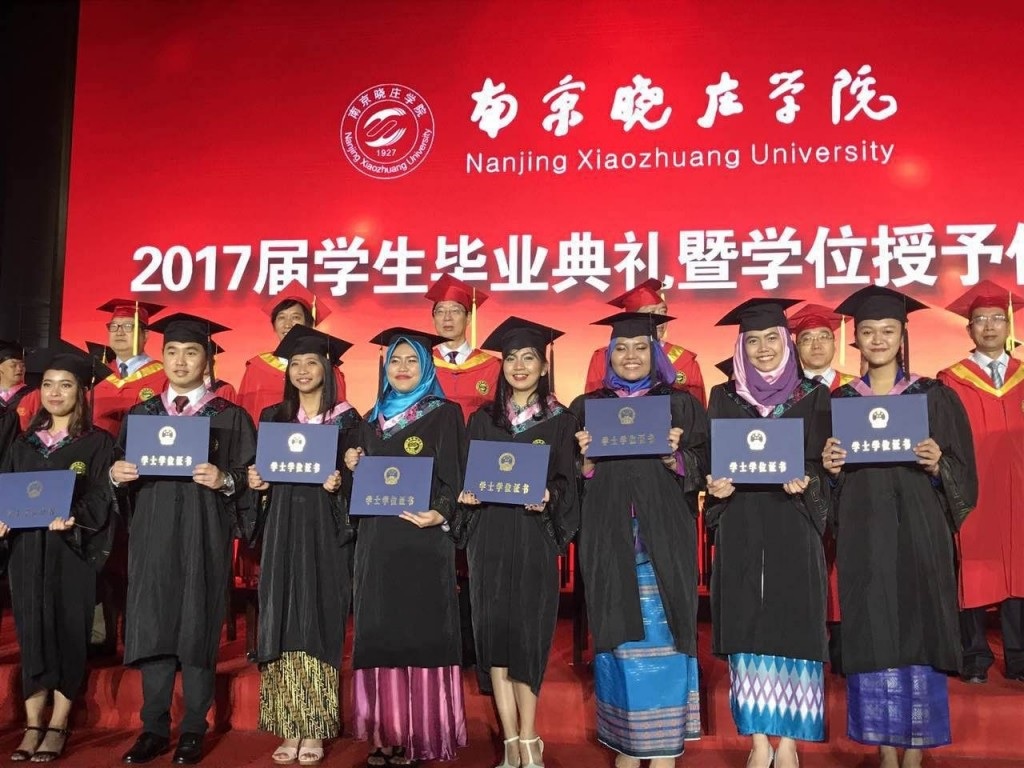 Fitriani Darwis, Esa Unggul’s Accounting student from Bulukumba who completed a Joint degree program at XiaoZhuang University expressed her difficulties when she first arrived and settled in Nanjing. This difficulty is due to the fact that many Chinese in Nanjing do not understand the accent that she and her friends used.

“In the beginning, it was very difficult to adapt, mostly because of the language. Even though we learned Chinese, our accent was different from theirs, so they did not understand what we said, When we shop, it is difficult to bargain or want to buy something, “Fitri said.

But Fitri and her friends finally found a solution to overcome language difficulties, which is making friends with Indonesian people who had long settled in Nanjing. “Luckily we have managed to contact Indonesian people who have been living in Nanjing for a long time, called Thentri so if there are any problem, we always rely on him if we want to shop in the market because he understands and speaks Chinese. but as time went on we started shopping by ourselves, “Fitri said.

To make it easier to adapt, Fitri chose to be active in several organizations while taking lectures in Nanjing. One of them is actively participating in the Nanjing branch of the Indonesian Student Association (PPI). In that activity, Fitri served as the Nanjing PPI Entrepreneurship Coordinator. The result is that she got a lot of experience about entrepreneurship in China, as well as entrepreneurship methods and tricks.

“I happened to be active in the PPI entrepreneurship coordinator, so from that activity I got a lot of connections and networks. I also learned how they (Chinese people) do business, so I indirectly practiced entrepreneurship in accordance with the major I took in economic field, which is accounting, “she explained.

In contrast to Fitri, Lulu Luciana, student from Lampung prefer to focus on academic studies, Aside from being required to complete study in Nanjing on time. She also spent more time visiting tourism attractions in Nanjing.

“I didn’t really involve in organizational activity there, rather, I spent my time with tourism. It is because most of the tourism attractions there were free, not to mention, accomodations there were also easily accessible, “Lulu said.

Lulu, who received a 100 percent scholarship from Nanjing Xiaozhuang University revealed that the convenience of accomodation can be seen from lots of accessible convenient transportation all over Nanjing. 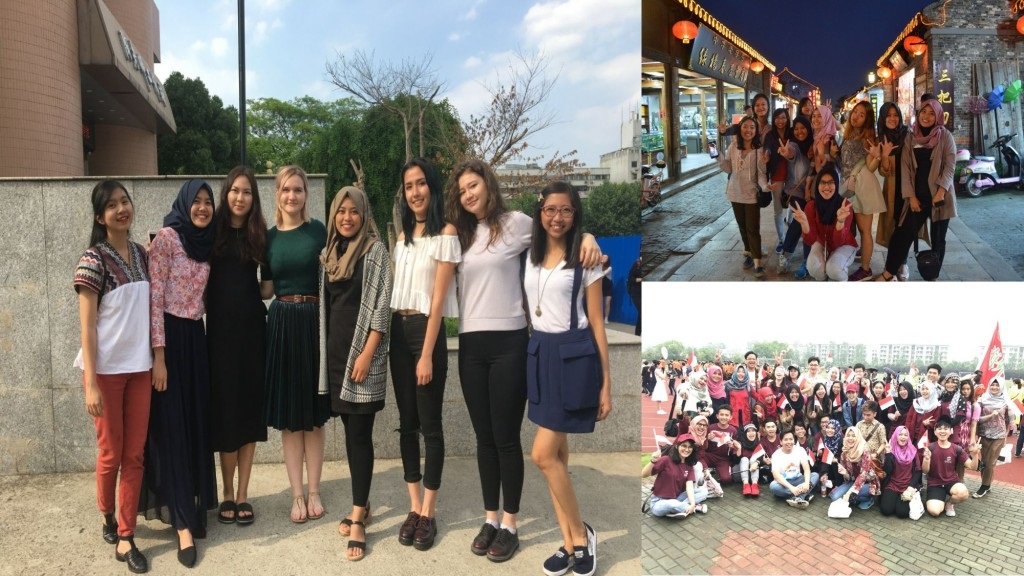 Finni Irene expressed that she and her friends were very aware of the differences from the teaching system applied in China. According to her, the most striking difference from the teaching method in Indonesia is the task load and the amount of practice in the learning process.

“In terms of academic differences and learning methods, we are taught to be able to explore a theme such as accounting, they want us to prepare a discussion in the class. So we immediately discuss and find solutions to a problem faced not only nationally, the discussion is also on international level, so we practiced more rather than studying the theory, “she said.

Finni, who once represented Jakarta at the national level singing competition added that after each lecture, the students were given a kind of homework which would later be discussed in the next meeting.

“One of the good thing is, we are given a number of tasks in the form of international cases, those will be the homework, then we will discuss in the next meeting. But this task is not a burden for us, instead we are taught to find solutions so we put what we learn to practice directly, “Finni said.

In fact, she also had time to study in a course that introduced the culture of each country, at that time she and her friends took the initiative to introduce Indonesian culture by introducing Yellow Rice. “There are courses that teach about cultural exchanges, where we are given the chance to show something about our country, now we are making yellow rice cone (Tumpeng) and they (Chinese and foreign students) like it a lot,” she said.

Another exciting stories obtained by the four female students when studying in Nanjing was expressed by Irene Angeline. During her studies in Nanjing, she found a lot of unique things including the activities of the elderly there.

“So, when I was there, whenever I walk around the night, I saw many  elderly who were exercising or doing slow aerobics. I don’t really know what they are doing though,” Irene said.

“The MRT here can still not be enjoyed by the society, in Nanjing, we can already use MRT, we can also try the fastest train in the world that can reach 350 km per hour and  also try the magnetic train,” she said.

Irene, who have won first place in the Jabodetabek Entrepreneurship Competition also hoped that the scholarship program offered by Esa Unggul related to the Joint Degree Program can be continued to Master Degree level. In the sense that this program should be able to appear again and be aimed to those who aims to pursue Master Degree.

“We hoped that this Joint Degree Program will not only stop at the Bachelor Degree level but must continue to Masters program, hopefully Esa Unggul can establish a Joint Master Degree programs with other universities,” Irene concluded.